Article : Hands Across Canberra celebrates all that’s good about a generous community 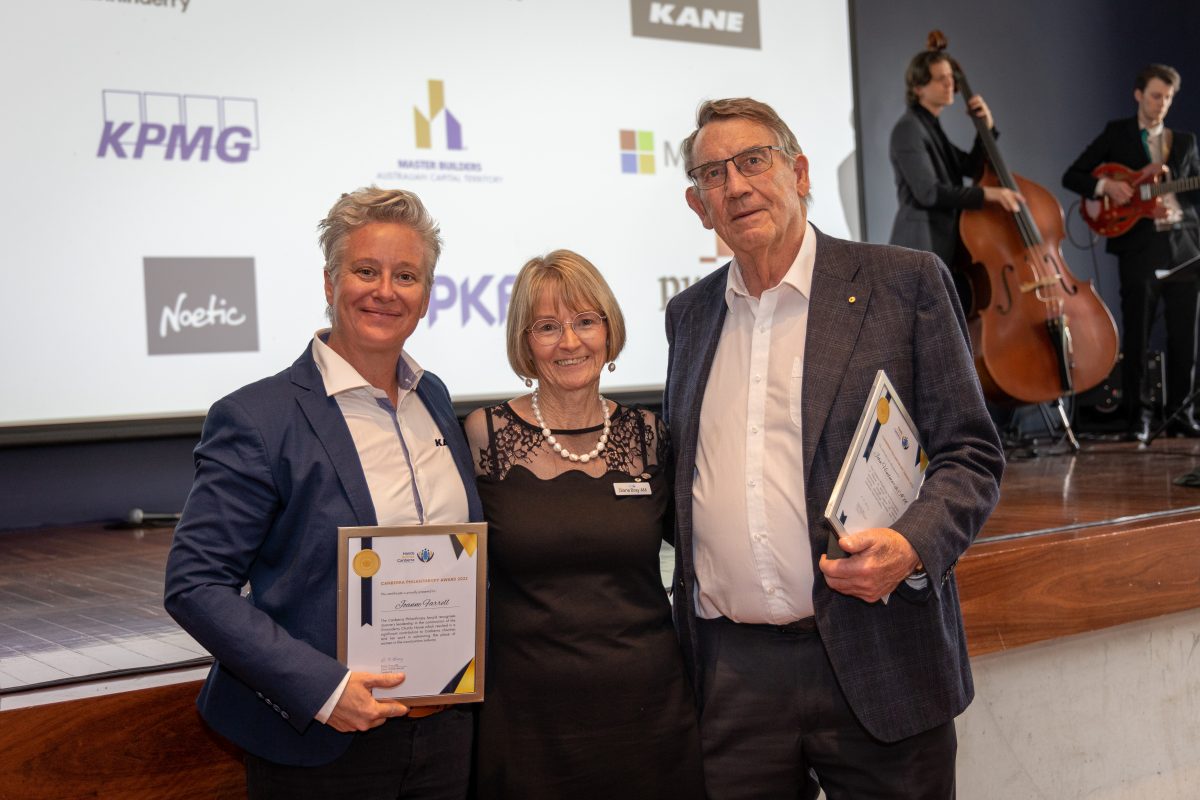 “We’ve seen the community become more aware that Canberra has a dark side. It’s a beautiful city, but if we lift the carpet, there’s so much we still hide,” says Di Kargas Bray, outgoing chair of Hands Across Canberra (HAC).

She is reflecting on years of work building the foundation which operates in tandem with the Chief Minister’s Charitable Fund to support multiple local charities and good causes.

HAC began as the germ of an idea between Di and Sandra Lambert, then Chief Executive of the ACT Department of Disability, Housing and Community Services, 14 years ago. That grew into a year of conversation, the formation of a business structure and today an organisation that is steadily growing a treasure chest for the good of the Canberra community.

At this week’s annual lunch for HAC, two outstanding figures were recognised for their contribution through the inaugural Canberra Philanthropy awards.

John Hindmarsh was there from the beginning of HAC with sage advice and generous support as a director, and Kane Constructions general manager Jo Farrell who is building the Strathnairn Charity House.

John Hindmarsh says the news of his award left him “so pleased, absolutely shocked and overwhelmed, but very chuffed about it”.

“I’ve always wanted to help where I can be genuinely useful in bringing a network of people together who want to get things done,” he says.

“So many of the people we help are battlers, and it’s been wonderful to see Hands Across Canberra’s impact grow. It’s nice to think back 14 years to when I was first approached with what sounded like a really good idea.”

Jo Farrell arrived in Canberra in 2013 and said she was “blown away by what Hands Across Canberra does, the charities affiliated with it, and the fact that Canberra is so generous and community-driven”.

“For me, undertaking the Strathnairn Charity House is a no-brainer. It speaks to who we are as a company, the people we want to benefit from the work we’re doing and ensuring that we all look after the most vulnerable,” she said. 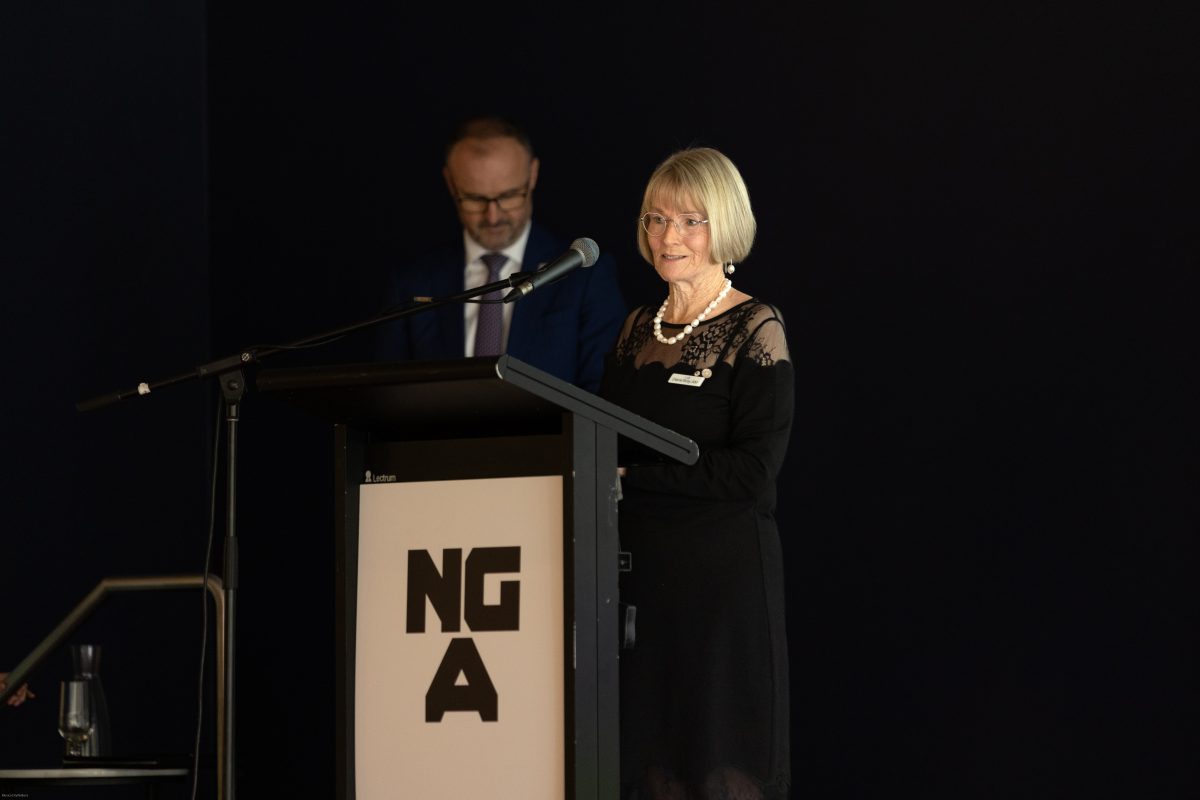 CEO Peter Gordon says that in their 12th year of operations, HAC has distributed $10 million worth of grants, acquired 300 business supporters and represents more than 80 local charities.

“I think the inaugural Canberra Philanthropy awards are probably long overdue recognition of people who make an outstanding contribution in our community, and individuals who have gone above and beyond advocating for philanthropic causes in Canberra, with full regard for the level of need in our community.”

Of John Hindmarsh and Jo Farrell, Peter says both are remarkable contributors.

“John has been a Canberran almost all his life and a contributor through all that time. The Hindmarsh Foundation was one of the first in Canberra and has provided an enormous amount of money throughout that time to a variety of causes, ranging from individual causes to the National Gallery, where he chaired their foundation.

“He was an inaugural director, he shaped much of our business direction and his legacy on the board continues.

“Jo Farrell is just a unique and compelling individual whom it’s almost impossible to describe. She leapt at the chance to construct the Sta, and as a senior woman in construction, she has an abiding interest in increasing opportunities for women, expressed through her Build like a Girl project.

“The Strathnairn Charity House will generate millions in funds for Hands Across Canberra; it’s one of the single largest one-off donations ever made and a remarkable project.”

Di Kargas says there’s some sadness about walking away from the organisation she’s led over almost a decade as chair but also a great sense of achievement.

“We’ve educated Canberra over the past 12 years that we are not all OK until we have equity and people feel like they belong. We still have work to do,” Di says.

“Business can do so much more, especially big corporates with national and international foundations who need to do something here in Canberra where they are living and earning good money.

“We want people to think about their capacity to give, where and why, and the purpose of their giving. Canberra is a very generous place, but we need to let people know we are struggling here in Canberra and encourage them to give where they live.

“Hands Across Canberra and the Chief Minister’s Fund are going from strength to strength. What better time for it to go to the next level and be part of it as an observer in the future and a supporter?”

To find out more, visit Hands Across Canberra.

Share article – Hands Across Canberra celebrates all that’s good about a generous community | Riotact (the-riotact.com)
We use cookies on our website to give you the most relevant experience by remembering your preferences and repeat visits. By clicking “Accept All”, you consent to the use of ALL the cookies. However, you may visit "Cookie Settings" to provide a controlled consent.
Cookie SettingsAccept All
Manage consent